At dawn Sri Guru Granth Sahib is brought from the Suchknda (carried on the head by a priest while a wisk called Chaur Sahib is waved continuously over it) to the Palki where it is placed on the Mangi Sahib Throne and covered with Remallas.

The Sri Guru Granth Sahib is then opened and Huckanama takes place. 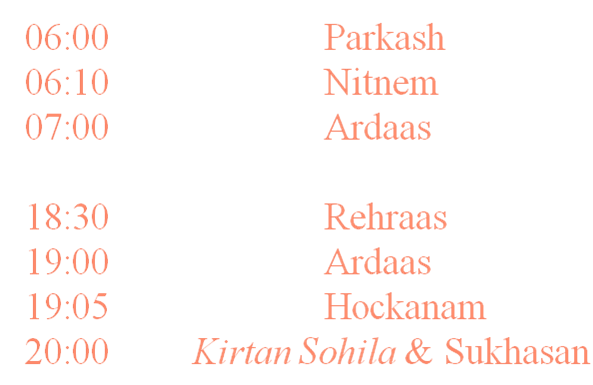 Parkash (ceremony for opening the Shri Guru Granth Sahib) is followed by Nitnem prayers and then Simran (i.e. meditation) where the Giani leads the Sangat. This is followed by the Asa-di-Vaar (singing) Kirtan and then Ardaas.

In the evening Rehraas Sahib prayers are said followed by Kirtan, Katha and Ardaas. The Huckanama is cited for the final time followed by the Kirtan Sohila & Sukhasan and then the Sri Guru Granth Sahib is retired for the day.

To assist the Giani & Granthi with their daily prayers – Gutkas (book containing the daily prayers) are available.

The Shri Guru Granth Sahib is left open at that page for the entire day for the Sangat to pay their respects, and people who can read Punjabi are encouraged to read the Hukannama – this is done with the permission of the Priests.

However, if Akhand Patha is taking place then no Huckanama is obtained until the Phog.