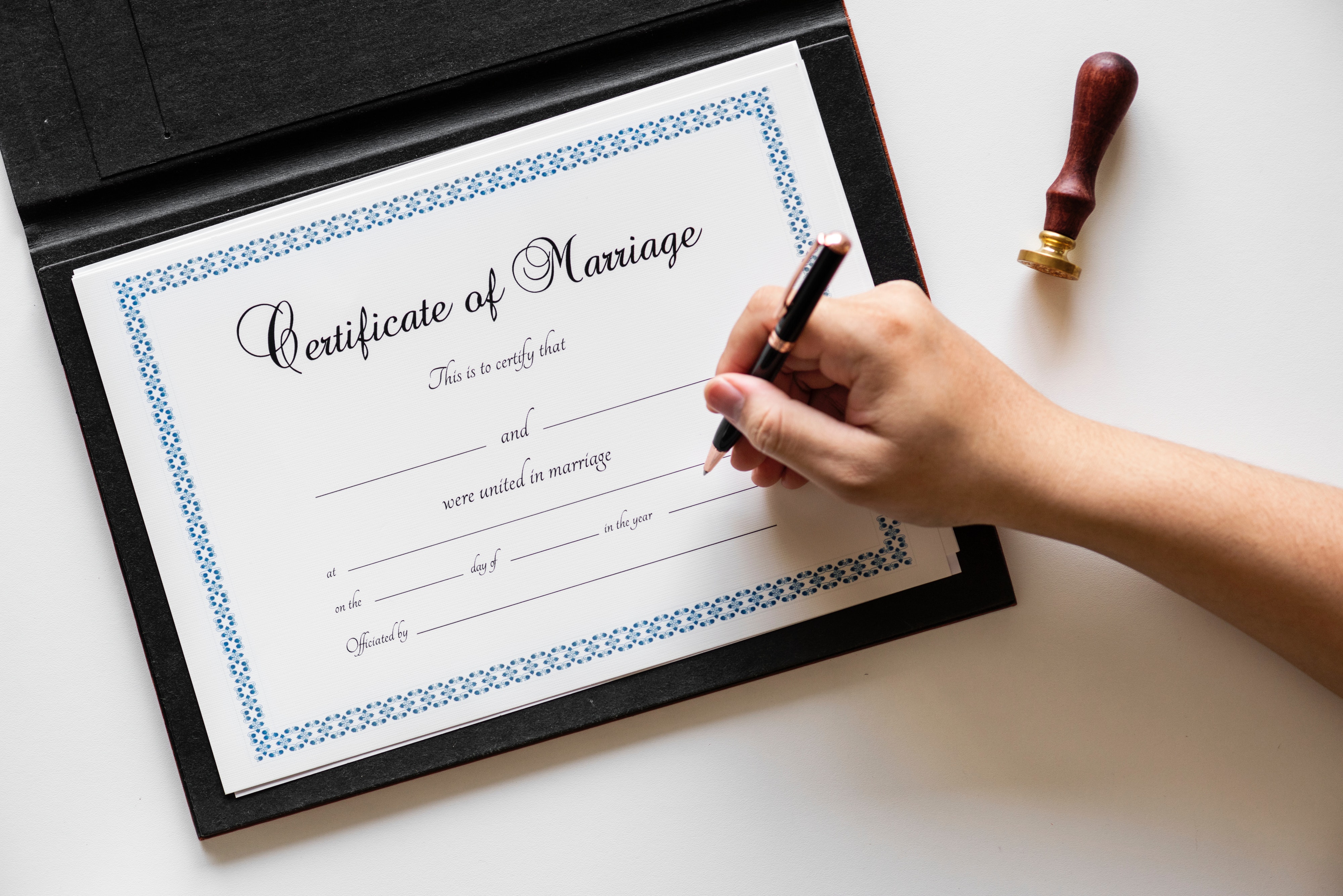 A Civil Marriage Ceremony at the Bhawan requires the bride and the groom to register their intention to marry at their local Registry Office and obtain permission so that the ceremony can be conducted at the Bhawan.

Charges – The Bhawan charges a fee of £40 to conduct a Civil Marriage Ceremony.

If you have any special needs and/or requirements please let us know in advance so that we can plan ahead to accommodate you and your part.

They may be seen immediately or given an appointment – allow 2 weeks for this process.

The registration office will display form stating the bride and groom’s intention to get married at their office for 28 days  (this period is known as the cooling off period) so that the people of the Borough know that you are getting married and to whom. On the completion of this process you will be given a form 262 (also known as the Blue Form) which you need to bring to the Bhawan only then the Civil Marriage takes place.

A dedicated registrar will be appointed by the Bhawan to conduct your Civil Marriage Ceremony.  You will be able to talk to him about any concerns you may have about the wedding or the process.   Ideally,  you need to allow between 6 – 8 weeks for this process.  If possible, please try to visit the Bhawan at least 2 months before the date and book a slot for your civil ceremony.

If the Anand Karaj ceremony is also going to take place at the Bhawan the civil marriage ceremony will be performed before the religious marriage.

Charges – The Bhawan charges a fee of £351 to conduct an Anand Karaj.

If you have any particular needs and/or requests please let us know in advance so that we can plan ahead to accommodate you and your guests.

On the wedding day the groom’s family and friends (known as the Baarat) travels to the home/town of the bride’s family and that is where most of the ceremonies take place.

The Anand Karaj ceremony takes place in front of the Sri Guru Granth Sahib and for this ceremony the bride usually dresses in red, pink or other bright colour and the groom usually wears a sharewani, turban and a scarf.

It is customary for the groom to arrive first in the hall where the ceremony is going to take place.  He presents a Rumala (a silk cloth that is used to cover the Shri Guru Granth Sahib) and places some money into the box. Then he pays his respect to the Sri Guru Granth Sahib Ji. by bowing down to touch his forehead to the floor. He then sits down in front of the Shri Guru Granth Sahib but to the left side.  The bride,  accompanied by some female family and friends members, also presents a Rumala and follow a similar custom and sits to the left of the groom.

The Anand Karaj ceremony begins with the couple and their parents standing up while the Ardass is cited by the Giani for a successful marriage.  The ragis then sing the hymn ‘Keeta Loree-ai Kaam’,

The bride’s father ties one end of the groom’s scarf to the end of the bride’s chauni (headscarf). This symbolises that she is now leaving the care of her father and is joining her husband to begin a new life together – this is referred to as Palla (or sometimes as Palle De Rasam).

The most important part of the religious ceremony is the four wedding lavan. This involves the couple tied together (i.e. by the groom’s scarf (palla) and the bride’s chauni ) and walking around the Shri Guru Granth Sahib (which is situated in the Palki, so they walk around the Palki).

This is referred to as the Lavan

To begin with, the ragies start to sing the appropriate hymns for the first Lavan. The bride and groom then bow down (by touching their foreheads to the ground) together they rise and walk around the Shri Guru Granth Sahib, in a clockwise direction.

Normally, the bride’s brothers/cousins stand around the Palki to help guide the couple around. This symbolises that these people are there to help and guide them in their lives. The bride and groom then return back to their original starting point and sit down on the floor, and once again bow down to the Shri Guru Granth Sahib.

There are four lavan in total (i.e. the couple walk around the Shri Guru Granth Sahib four times while tied together). During this process the ragies sings hymns which describe various stages of love and commitments between the couple.

This is followed by the Anand Sahib Paath (hymns from Shir Guru Granth Sahib) and Ardass. The wedding ceremony is concluded by reading the Hucanamma

The Bhawan provides assistance to our members and their families to find partners from within our community. The Bhawan runs an introduction service for potential partners. The matrimonial office is open every Sunday between 1:00 pm and 2:30 pm all information is treated in confidence.

This service is only for the permanent residence of the UK

The Sangat will be allowed to invite external caterers if they so wish, in which case they will be charged for the hire of the hall and facilities.